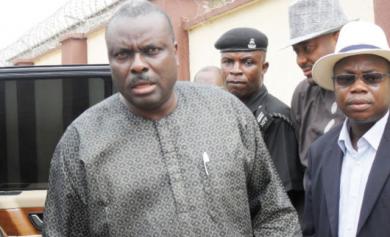 Britain’s Justice Minister Jeremy Wright has said that the eligibility of former Governor of Delta James Ibori to complete his prison term in Nigeria would be determined by Nigeria and UK governments.

Wright gave the clarification on Thursday in Abuja when he visited the Acting Minister of Foreign Affairs, Prof Viola Onwuliri, shortly before he signed a Prisoners’ Transfer Agreement (PTA) between both countries.

Responding to questions from journalists on the fate of high profile Nigerians currently serving in UK jails, including Ibori, under the new agreement, Wright said the consent of a prisoner was not required before repatriation.

“The compulsory nature of this prisoner transfer agreement is that the prisoners’ themselves do not have to choose where they go or not but the respective countries do still have an opportunity to discuss whether a transfer should be made,’’ he said.

In April 2012, a British court sentenced Ibori to jail for 13 years for money laundering and associated crimes.

Ibori’s wife, sister, mistress and London solicitor are also in a UK jail having been convicted of related crime.

Earlier, Onwuliri, who described the PTA as “historic,’’ said experts from both countries would work out modalities for implementation before its ratification.

“We have been on the prisoners agreement for a long time and we are happy that we are beginning the year on a happy note by signing this agreement,’’ she said.

The minister expressed delight that the agreement would improve the condition of Nigeria prisons based on earlier agreements reached before the signing.

She pledged that the Nigerian government would continue to improve the condition of prisons around the country, which had received a boost with a one million pounds commitment from the UK Government.

Also speaking, Mr Abdulazeez Dankano, the Director of Consular and Immigration Services in the Ministry, noted that both countries were signatories to the Scheme for the Transfer of Convicted Offenders within the Commonwealth.

Dankano stated that the scheme allowed for transfer of prisoners between Nigeria and the UK where the consent of both states and the prisoner was obtained.

He said that under the Commonwealth Scheme, only one Nigerian had been repatriated from the UK since inception.

There are 521 Nigerians currently serving jail terms in the UK and only one British national in Nigeria prison.

According to ministry officials, about 60 per cent of Nigerian nationals in UK jails can qualify for the compulsory prison transfer agreement signed by Nigeria’s Minister of Justice and Attorney-General of the Federation, Mohammed Adoke and Wright.