21-year-Old-Girl Resurrects After 2 Days In Mortuary 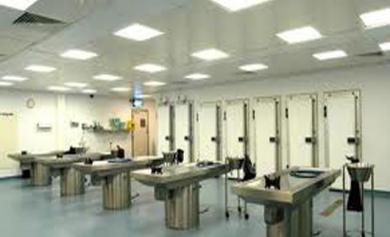 A memorable day, June 20, 2011, would forever remain fresh in the mind of the family members family of Mr. Boniface Ugwu, an ex – official of the Nigerian Railway Corporation, Benue State as it was the day their daughter , Adaora Ugwu, who was believed to have died after a fatal accident and deposited at one of the mortuaries in Enugu State, resurrected.

The 21-year-old Adaora, had gone to Markurdi for her JAM’s Unified Tertiary Matriculate Examination (UTME) on the fateful day and was returning to Enugu to prepare for the last Army recruitment exercise when a mini commercial bus belonging to the Enugu State Transport Company (ENTRANCO) marked, XL812 UWN which was returning from Markurdi to Enugu city , collided with an Nsukka bound mini bus marked XB504 TKP belonging to Peace Mass Transit, leaving over 20 passengers of the two vehicles dead, including Adaora and four recently discharged members of the National Youth Service Corps (NYSC).

The accident, which occurred at Udi Local Government Area of Enugu State, caused traffic jam as passengers onboard of almost all the vehicles plying the Enugu /Nsukka route forced their drivers to stop in order to catch a glimpse of the horror scene.
In a swift reaction, operatives of the Federal Road Safety Commission FRSC made frantic efforts to save the lives of few of the victims of the accident who were still breathing and took those they thought were
already dead to the mortuary in Enugu State.

Adaora was one the victims who were deposited at the mortuary but she shocked workers of the mortuary when she miraculously came back to life after two days in the cold room.
The victim’s relatives had gone to the mortuary for identification of her remains when they suddenly discovered that there was life in her as she was moving her bodies and sneezing, an indication that she was still alive.
Apparently happy that their daughter was still alive, the relatives said to have alerted the management of the hospital for prompt attention.

The development, which threw the entire hospital into a frenzy of celebration also attracted the attention of passersby who immediately joined in thanking God for his divine intervention.

It was gathered that when officials of the hospital at Ninth Mile Corner, Enugu, confirmed that there was still life in Adaora, they quickly moved her to the National Orthopedic hospital, Enugu were she is currently receiving medical attention.
When LEADERSHIP visited the female ward of Orthopedic Hospital, Enugu, Adaora who was now addressed as “Miracle Girl” was still battling with severe pains following degrees of injuries she sustained during the accident.

Adaora, who managed to speak “I am a child of God, and I know the God I’m serving .
Just few days ago, I asked my mother where I was and she said I was at orthopaedic hospital

“Adora also told our correspondent that she was optimistic that that God who began the good work in her life would definitely bring it to a conclusive end “what I need from all of you this time around is prayers, because I am really passing through severe pains” she concluded.
LEADERSHIP WEEKEND gathered that when regained consciousness inside the mortuary she Adaora thought she was beside other victims of the accident when she woke at the mortuary, forcing her not to cry for help.
?

Gt The Guitar Man: The Man… His Music
“We Had To Go The Extra Mile Over Tambuwwal”