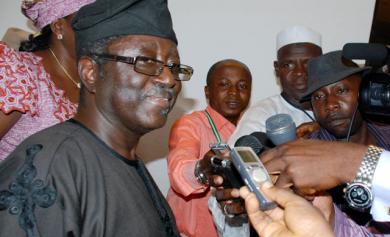 Extra troops yet to arrive – Criticised by many for his inability to ensure security in his state, Governor Jonah Jang is still hopeful that peace will be restored to Plateau State. But he does not pretend to be God who can end the crisis that has killed more than 1, 000 people and rendered many more hopeless.

At the end of a four-hour meeting with the president yesterday, however, the governor rejected the notion that a state of emergency had been imposed on his state through the back door. Jang said: “Well, go and read your constitution. Am I God to end Jos crisis?

Already, the task force has been under the command of the president. Therefore it is not an indication that the security has been taken over from the state. We hope to end the crisis. Is Plateau the only place that has security problem? Security situation is all over the country, so why are you so particular about Plateau State? It is the job of the president because he is in charge of the task forces.”

He added, however, that he trusted the president’s wisdom in whatever he was doing to end the Jos crisis.

Jang arrived the presidential villa, Abuja, at about 1:13pm and entered into a closed-door meeting with President Jonathan for over four hours. After the meeting, he came out looking rather dejected and hostile to State House correspondents.

He refused to field questions from newsmen until the pressure became unbearable for him. “My coming here is routine and I briefed him. I have given him my report on Plateau State. It was very cordial, and everything is well. We all agreed to ensure peace on the Plateau,” he said.

Meanwhile, LEADERSHIP checks reveal that despite the order by President Jonathan that the military should take over the security of Plateau State, no troops have arrived in the state. From the Government House Rayfield to Jishe, only police presence was noticed. Most checkpoints were deserted until night when some members of the special military task force (STF) manned the check points.

Reacting to the delay in the deployment of troops, the director of press information, Defence Headquarters, Col. Mohammed Yerima, said there was need to put some logistics in place. He said the various forces, including the vigilante and “Operation Rainbow” would be harmonised in a bid to curb the security challenges.

Also, the state government has described the move by President Jonathan to deploy troops to the state as a step in the right direction that will bring lasting peace to the state. The senior media adviser to Governor Jang, Mr. Pam Adangwom Ayuba, told LEADERSHIP in Jos that the state government was very happy with the development. “It is a very good omen; a burden of security is now being lifted off the state,” he said.

Similarly, the secretary of the Ulama Council of Elders in Jos, Barrister Lawal Ishaq, yesterday commended the president for the positive move, but was quick to add that the restoration of permanent peace is most important. He called for the quick implementation of the pending reports.

The secretary of the Plateau State chapter of the Christian Association of Nigeria (CAN), Rev Chuwang Davou, also welcomed the move by the federal government to bring lasting peace to the people of the state. He said a peaceful environment was very necessary for progress and development.

Why Women’s Dreams Are Much Wilder Than Men’s
Boko Haram: 8 Suspects Arraigned