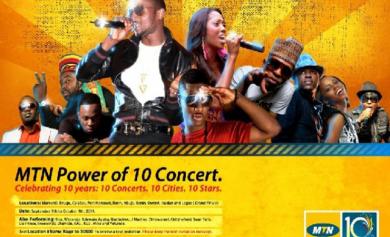 After an electrifying outing in Makurdi and Enugu last weekend, the MTN Power of 10 Concert is set to wow residents of Calabar and Port Harcourt as music rave-of-the-moment, Whiz-Kid, and a line-up of other Nigerian performers are billed to storm the show which holds on September 16 and 18, at the Cultural Centre, Calabar, Cross River State, and the Civic Centre, Port Harcourt, River State, respectively.

?The General Manager, Consumer Marketing, MTN Nigeria, Kola Oyeyemi, who spoke recently on the essence of the concert, expressed gratitude to the residents of Makurdi and Enugu, for a massive turnout while assuring that Calabar and Port Harcourt would experience nothing short of a double-dose performance.
“MTN Power of 10 Concerts is our own way of giving back to Nigerians for ten years of support and reaffirming our determination to serve them. What we have done in Makurdi and Enugu edition of the concert is only a tip of the iceberg. Calabar and Port Harcourt is next and it promises to be even greater,” he said.

?The concert which rolls out in 10 cities to celebrate MTN’s tenth year in Nigeria will pull a host of top ranking artistes and celebrities to the Niger Delta region for a showdown. Thrilling performances are expected from J-Martins; Sensational Singer, Omawunmi; Reggae King, Ras Kimono; among others. The Concert will also feature performances by MTN Project Fame Winners, Iyanya Mbuk, Mike Anyasodo and Chidinma Ekile while Seyi-Law and Jedi will be on ground to crack some ribs with jokes.
?