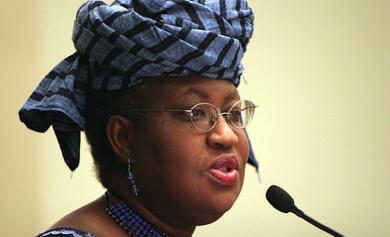 Despite the stiff opposition from the 36 state governors over the propriety of the Sovereign Wealth Fund (SWF), the federal government would not reverse itself on the issue, as it is presently finalising the fund’s implementation framework which will be launched very soon.

This was disclosed by the coordinating minister for the economy and minister of finance, Dr. Ngozi Okonjo-Iweala, at the weekend during a briefing with Nigerian journalists during the just concluded Annual Meetings of the World Bank and International Monetary Fund (IMF) in Washington, DC.

According to Okonjo-Iweala, while there is an ongoing dialogue with the governors, a working group led by a former managing director of Guaranty Trust Bank Plc, Mr. Fola Adeola, is currently tying the loose ends of the fund’s implementation process.

She said, “We have been working on the implementation guideline for the sovereign wealth fund, in a working group led by Fola Adeola and some people working with the former minister of finance Dr Mansur Muktar and the Ministry of Planning as well as outside experts. We have now come up with implementation guidelines which we intend to launch as soon as possible, but you know we want to finish dialogue with the governors.”

She noted that President Goodluck Jonathan and herself had continued to dialogue with the governors because they believed that they were all working towards a strong Nigerian economy that would benefit everybody,

The minister added: “As a result, this dialogue is ongoing; they have invited me to join them. We are meeting in a couple of days to interact with them a bit more and explain. Following that will be the next Economic Council taking place on September 29. The vice president and the president have asked me to make a presentation formally. All this dialogue is a good thing so that we can understand each other.”

Okonjo-Iweala also disclosed that the federal government was negotiating a $550m finance from the World Bank to enhance its efforts at job creation in Nigeria.

She said that there had been successful negotiation on financial support for the programmes from the World Bank and with the Africa Development Bank (ADB), International Fund for Agricultural Development (IFAD) and other financial organisations.

She added that several of the priorities included agriculture where detailed plans had been developed by the minister of agriculture for investment in the sector.

The minister explained, “One of the things we did here was to try and negotiate extra financing to support this sector from the World Bank. We are in discussion with them to see if we can advance about $500 million to support the sector and also the environment because we see agriculture and environmental issues linked.

Even as she noted that the government had not concluded arrangements on the financial support, she added that it looked possible. “We are very happy on that. we will conclude it as soon as we get to Nigeria and a new country director arrives. So, that is a very specific thing that we have been able to do here. Second, we just had a meeting with both the International Finance Corporation (IFC) with the World Bank Treasury and with representatives of a group of investors who are interested in public-private partnership (PPP) projects in Nigeria,” she said.

The minister also disclosed that the prospective investors were specifically interested in financing the second Niger bridge, noting that there had been discussions with them on what would be the next step and how the IFC would come in and manage the operations, adding that she was optimistic that it could turn out to be one of the best PPP ventures that Nigeria would do.

On concerns about the security challenges in the country, Okonjo-Iweala said there was no “overwhelming” negative reaction from the investors. “We have heard from the investors we talked to; in fact they believe that the government is working and I think that we should build on that,” she said.?