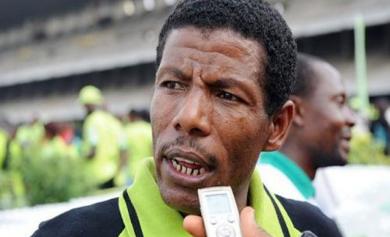 Former marathon world record holder Haile Gebrselassie has shoved aside retirement insisting that he is not going anywhere but targeting success at the 2012 Games in London.
?
?
The 38-year-old Ethiopian dropped out of his second successive marathon in Berlin on Sunday and saw his record time broken by Kenyan Patrick Makau.
?
?
But he told BBC that:”I don’t want to miss the Olympics. It is London and to win here is something very special. I want to go down in history.”
?
As well as a brace of Olympic 10,000m gold medals, coming in Atlanta in 1996 and Sydney four years later, Gebrselassie has won four World Championship 10,000m golds and four World Indoor Championship golds (three at 3000m, one at 1500m) and has nine marathon victories to his name?
during a glittering 20-year career. But he has been suffering from exercise-induced asthma which contributed to him dropping out the race in Berlin after 35km.?
?
?
This followed his failure to finish the New York Marathon last year because of an inflamed knee, which resulted in him announcing his retirement – a decision he reversed just a few days later. “Sometimes when I look back I wonder if that was me or somebody else. I shouldn’t have announced like that. But New York was a hard one. I don’t remember any of that day. “When asked if he was considering retiring again soon, he replied: “I don’t agree with that. If they think Haile Gebrselassie is old now – not yet. I’m only 38. Last Sunday I tried my best but it didn’t work. Now I’m looking forward. I’m planning for the next marathon. I’m thinking about qualifying [for the 2012 Olympics].
?
The qualification time has to be something special. We Ethiopians have to run at least 2:04 or 2:05, because only the top three go to London. Many of the Ethiopians have already run these times so I have to be careful if I want to be in London. That is why I ran fast in Berlin at the beginning of the race and, of course, I didn’t finish.”