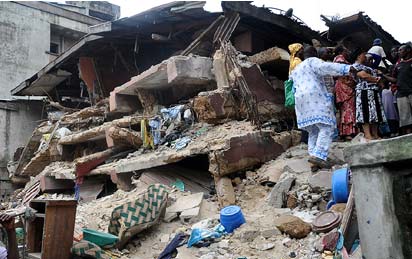 Lagos State may yet be at the brink of building collapses according to the Building Collapse Prevention Guild (BCPG).

On Monday, the BCPG alerted about the existence of 36, 000 buildings waiting to collapse in the State.

This is coming in the wake of two-storey building collapse on Monday, March 25, barely two weeks after a three-storey building fell to the ground on; incidentally, the two accidents occured in Lagos Island.

According to the President of BCPG, Mr Akinola George, the recent collapses and the awaiting 36, 000 is because most buildings in Lagos are constructed by unskilled or semi-skilled contractors.

He said the professionals have been overlooked in building construction matters.

“A survey revealed that over 45,000 sites existed at a time in Lagos State. Twenty per cent of this translates to 9,000. Hence, by deduction, quacks and other faceless characters by whatever names they are called are responsible for the remaining 80 per cent. A whopping 36,000 potential collapses are waiting to happen,” the group added.

It urged the State government to “set up a high-powered committee, comprising of government officials and private sector professionals, which would employ the Lagos State Material Testing Laboratory to check the integrity of buildings in these areas.”

Buildings in Lagos Island, Oworoshoki/Bariga, Somolu, Ebute Meta, Mushin, and Ajegunle areas of Lagos have been identified to be in precarious state and the group asked government to pay attention to those locations.