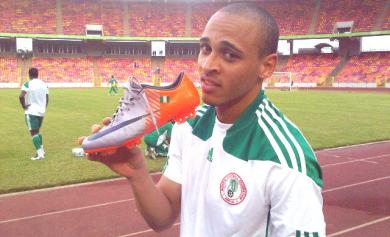 NFF technical committee chairman, Barrister Chris Green has revealed that the absence of Super Eagles and West Bromwich Albion star, Osaze Odemwingie will be felt in the crucial game to be decided this Sunday in far away Madagascar.

He, however, said the team will cope without the English premiership forward.

Odemwingie, who was expected to return to Super Eagles action after he missed the team’s previous two matches due to a face-off with Coach Samson Siasia is ruled out from Sunday’s crucial 2012 Nations Cup qualifier against Madagascar, in Antananarivo due to a recurring ankle injury.

Odemwingie is not the only casualty as the trio of Danny Shittu, Kalu Uche and Taye Taiwo are the latest Eagles missing from the battle of Antananarivo.

Not bothered by the spate of withdrawals occasioned by injuries, Green told SuperSport.com that although Odemwingie will be sorely missed but that his absence will not affect the fortune of Super Eagles in Antananarivo.

“It is quite unfortunate that Osaze Odemwingie is out of the Nations Cup match against Madagascar due to injury.

His absence will be felt, he is a key player.

Well, the team has played two vital matches without him and they notched up good results, I am sure the coach has capable replacement.

Coach Siasia should see it as a challenge and go ahead to prosecute the game without him.”

Green said that the Eagles will record a re-sounding victory over Madagascar. “The game is a must win for us and I know the players are seeing it from that angle. There is a new spirit among the players, that spirit will see them overcome their hosts,” he said.
?

Drought In The Horn
US Open: Federer Beats Ashe