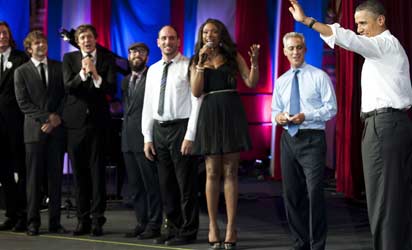 The historic presidential election in the United States has come and gone. However, opinion differs as to what implications the re-election of President Barack Obama would have on American politics, the country’s economy, healthcare and immigration, among other issues. LEADERSHIP US Bureau Chief, ABIODUN OLUWAROTIMI writes.

An outpouring of support from Hispanic voters helped to usher President Barack Obama to a resounding re-election win last Tuesday, and immigration reformers say this dynamics had set the stage for a bipartisan reform deal next year.

Conservatives in Congress have successfully killed efforts to pass immigration reforms over the last decade, even when a GOP president proposed them. But Obama’s dominance over Mitt Romney among Hispanic voters, advocates say, will force Republicans to accept some version of reform or risk losing national elections into the foreseeable future.

“The Republican Party has to decide: Do they want to take this issue off the table? Or do they want to be a whites-only party that will make it impossible to compete?” Frank Sharry, executive director of America’s Voice, which advocates for immigration reform, said on Wednesday during an interactive session.

Sharry predicted that immigration reform “will quickly become the top legislative priority after fiscal and budget issues” next year.
“The election was a game-changer,” he said, “and the Republicans will see coming to the table as a political imperative.”

Rep. Luis Gutierrez delivered a similar message in the wake of the election. Warning that that “the road to the White House goes through Latino neighborhoods,” the Illinois Democrat said Romney’s shift to the right on immigration during the GOP primaries buried his chances of winning the presidency.

But Gutierrez, who’s lashed out at Obama for not pushing harder for immigration reform in his first term, also challenged the president to make it a top priority of his second.

“Let’s be clear,” he said, “the president and Democrats cannot be satisfied that the other party is repulsive to most Latino voters and lots of other voters as well.

Gutierrez is urging Obama to “call Republicans and Democrats to the White House who want to chart a reasonable course forward on immigration and begin the process of delivering.”

Conservatives lambast Romney, vow to take over Republican Party
Conservative leaders have lashed out at Mitt Romney, saying his attempts to paint himself as a centrist and hide his principles cost him the presidency.

They vowed to wage a war to put the Tea Party in charge of the Republican Party by the time it nominates its next presidential candidate.

“The battle to take over the Republican Party begins today and the failed Republican leadership should resign,” said Richard Viguerie, a top activist and chairman of Conservative.

He said the lesson on Romney’s loss to President Obama on Tuesday was that the GOP must “never again” nominate a “a big government established conservative for president.”

“Romney took all the right stances, no question. The problem was not communicating them on the national stage with President Obama,” said Marjorie Dannenfelser, the head of the pro-life Susan B. Anthony List.

Martin argued that there was no repudiation of the Tea Party by the electorate because Tea Party values were not firmly articulated.

“This is not the death of the Tea Party,” Martin said.

“Tea Partiers will take over the Republican party in the next four years,” Viguerie said.

In the meantime, conservatives will work to ensure that congressional Republicans do not compromise their principles in fiscal talks with Obama, he said.

“Conservatives and Tea Partiers are just sick and tired of Republican leaders compromising on the state and national level with Democrats that grow the size of government,” Viguerie said. “We are going to hold their feet to the fire.”

Bozell said conservative groups need to up their financial pressure on GOP lawmakers unless they agree to a series of demands, including again vowing to approve of no tax increases for anyone.

Conservatives begin to admit defeat in their 3-year war against Obama Care
President Obama’s re-election, and an expanded Democratic majority in the Senate, dealt the final blow to Republicans’ hope for repealing the Affordable Care Act (ACA). And though conservatives still say the law will be a disaster once it’s fully implemented, they’re finally acknowledging that it will, in fact, be fully implemented.

The conservatives also admitted that with Obama in the White House for another four years, the healthcare law “will spread like termites in the national economy.

“Now ObamaCare is a hydra,” Turner said, referring to the mythological creature that grew two new heads whenever one of its many heads was cut off.

Supporters of the ACA are equally sure it’s here to stay, and they’re confident it will be a success once it’s fully in place. But they have been treating it as the law of the land since it became the law of the land, while Republicans have held out time and time again for the possibility of repeal.

“While it’s sort of the political status quo in some ways, I think there has been a lot of pent-up work that is now going to be unleashed,” said Sabrina Corlette, a health policy expert at Georgetown University. “Now I feel like we are all systems go. We can focus on getting the law up and running.”

Republicans believed they could kill “ObamaCare” during the legislative debate, then hoped for a repeal vote after the 2010 midterms, then pinned their hopes on the Supreme Court. They met defeat at every turn. And though the issue still helped motivate the GOP base this year, a Romney victory and a Republican Senate were the last practical opportunity for repeal.