The path chosen by the country’s local based athletes to air their grievances as regards some changes in the Athletics Federation of Nigeria’s Golden League Meet has led to the Federation to not only suspend the Golden League but has also place on suspension the entire athletes and hand three year bans to the leaders of the protest.

For leading the athletes’ revolt the duo of Olalekan Soetan (Pole Vaulter) and Deinma Afiesimama (Hurdler) were slapped with a three-year bans by the Federation. 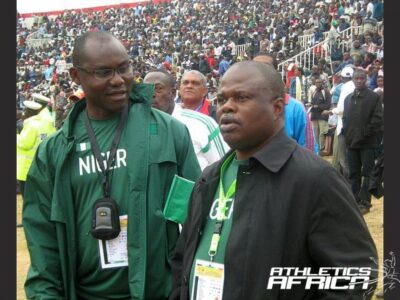 Announcing the ban at the main bowl of the University of Benin Sports Complex, the proposed venue for the Golden League Meet, AFN Technical Director Navy Commodore Omatseye Nesiama said the two athletes are to stay away from any athletics event anywhere in the country or risk tougher sanctions if they fail to abide by the standing punishment.

“The two ring leaders have been suspended for three years from all our competitions they should not come to our venues, meanwhile all athletes are also placed on suspension until they re-apply to the AFN through their clubs, states council and the likes that they will abide by this code of conduct,” the AFN technical director stated.

Over 600 athletes were at the supposed venue of the 2nd leg of the Golden League Meet which was coming at the heels of the first leg held in Sagamu two weeks ago but rather than take to the tracks to compete, the athletes were locked in meetings in which they claim they were ironing issues out as it concerns their participation in the League.

The AFN only recently adjusted its rule which only guarantees prize monies for athletes that only meet certain standards but one of the major grouse of the athletes was that regardless of meeting the standards or not there should be monies for athletes that at least make the finals of their event. The AFN however faults the athletes’ position as they argue that it only breeds mediocrity.

The AFN Technical Director stated that a code of conduct was in place for the athlete but their actions and inactions on Saturday negate the written document.

Navy Commodore Nesiama said he and indeed the AFN board are not perturbed by the display of athletes but only surprise that they could give themselves cheaply to be used.

“I am not disturbed but only surprised that our athletes will allow some few people create a scenario of indiscipline and as a military person I don’t condole such”.

The latest development has further weaned down the chances of the local based athletes to make qualifying times that would give them opportunities to compete at the National trials in Calabar where  country’s team to the Wold Championships in Moscow will be selected.