Ejike Uzoenyi opened the scoring for Nigeria in the 22nd minute, when he connected Ifeanyi Ede’s well laid pass from the left. Ede made it 2-0 for Nigeria with a 32nd minute penalty after Gbolahan Salami was brought down by South Africa goalkeeper Moeneeb Josephs.

Nigeria goalkeeper Agbim denied South Africa a goal in the 61st minute, before Ejike Uzoenyi completed his brace in the 64th minute to give Nigeria 3-0 lead.

Bernard Parker scored South Africa’s consolation goal from the penalty spot in the 81st minutes after Ugonna Uzochukwu was adjudged to have brought down Matshego inside the 18-yard box. 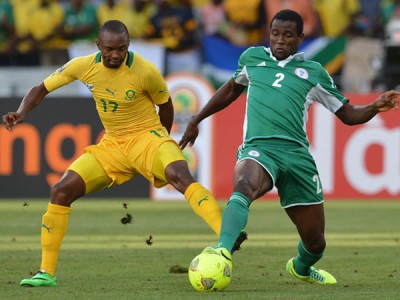 Solomon Kwambe was red carded in the 74th for a second bookable offence, two minutes later South African’s Vuyo Mere was sent off as well for a foul on Gbolahan Salami.

Meanwhile, South Africa head coach Gordon Igesund agreed his team lost to a better side and have no excuse, but he’s not going to quit yet.

“The Nigerians deserved their victory, they were physically stronger, were hard running and fully capitalised on our glaring mistakes. I am going to offer no excuses; we were today beaten by a better side,” said Igesund.

“We however, missed some of our regular players especially at the back. But that is no excuse, I will repeat again. We were just not good on the day.”

“I had no mandate going into the CHAN tournament. I think this Bafana team has improved greatly in the last few months. I will continue until my contract runs out in June. But if SAFA think it is high time for me to go, that is fine with me. It is not in my hands,” added the coach who also told the media the defeat was not his lowest coaching moment.

Mali and Nigeria has therefore qualified for the quarter-finals from Group A. Nigeria finished second with six points from three matches with group winners Mali recording seven points.

CHAN 2014: Nigeria heads to Semis with 4-3 win over Morocco
Nigeria loses to Algeria and Angola at African Handball Cup of Nations