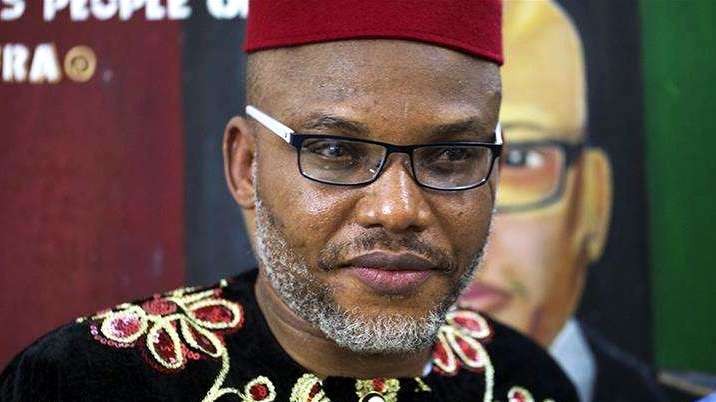 Justice Binta Nyako of the Abuja Federal High Court on Thursday, issued bench warrant for the arrest of Nnamdi Kanu.

The Indigenous People of Biafra (IPOB) leader has failed to appear in court since April 25, 2017 after he was granted bail.

Justice Nyako directed that his trial on charges of treasonable felony proceed in his absence.

Her decision was anchored on the provisions of Section 352(4) of the Administrative of Criminal Justice Act, 2015.

Magaji Labaran, the lead prosecuting counsel, made an oral application for the court’s orders which defence counsel, Ifeanyi Ejiofor opposed, asking for more time to explain reasons behind his client’s absence from court by filing all necessary papers.

Kanu’s lawyer insisted that his disappearance was due to invasion of his Afara-Ukwu home by soldiers during the military’s ‘Operation Python Dance II’ staged to quell agitation for a Republic of Biafra in Eastern Nigeria.

But the judge held that there was no connection between the said military invasion and the IPOB leader’s disappearance; she overruled the objection, insisting that counsel Ejiofor’s request was belated.

She also noted that Kanu had violated the conditions of his bail.

On that premise, Justice Nyako said “Proceedings must end one way or the other”.

She added: “I have given the counsel for the defendant more than enough time to produce him in court. Therefore, by virtue of Section 252(4) of the Administration of Criminal Justice Act, 2015, the only option open to do is to order that the trial will continue in his absence.

“Also, in the absence of any reasonable explanation for his absence, I hereby revoke his bail and order that a bench warrant be issued for his arrest.”

She fixed June 18 for trial to commence with or without Kanu’s presence in court while Kanu’s lawyer, Ejiofor, vowed to appeal the court’s order for his client’s arrest and trial in absentia.