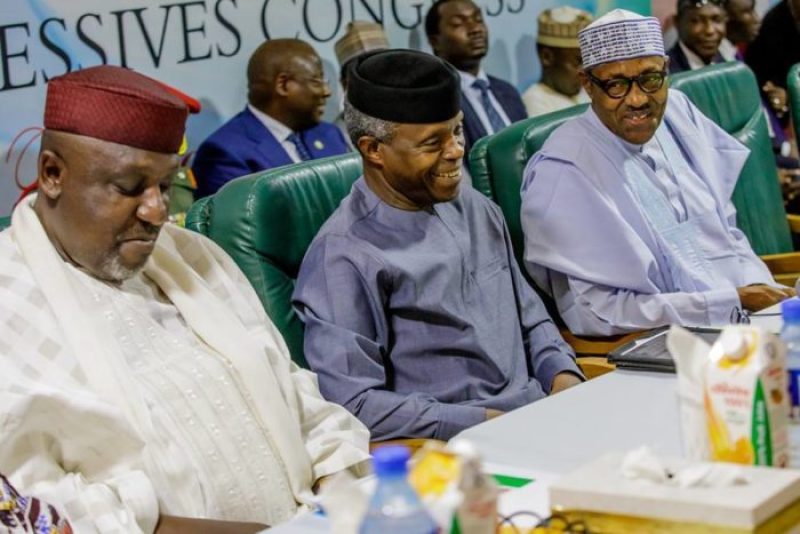 Leaders of the All Progressives Congress (APC) gathered together in Lagos for the annual Bola Tinubu colloquium, in celebration of the statesman birthday.

Governors, security chiefs and loyalists from every region where the party holds power were present at the 67th edition on Thursday with the exception of Ibikunle Amosun of Oyo State who did not attend.

As protocol demanded, Osinbajo called out the names of governors and service chiefs present without mentioning Okorocha and Ganduje.

The VP also acknowledged presence of the Inspector-General of Police, Mohammed Adamu, other service chiefs and several monarchs.

Okorocha who is serving suspension by the APC, and Ganduje were snubbed by the Vice-President despite being present.

Amosun’s absence at the colloquium was conspicuous considering the recency of disagreements between him and Tinubu who clocks 67 on Friday.

The Ogun governor is also serving suspension from the party following anti-party activities.

Amosun openly campaigned and endorsed an opposition gubernatorial candidate for the State, Adekunle Akinlade, who was his choice candidate.

Amosun, who is now a senator-elect, had described Tinubu as a Capo di tutti – Italian for the overall boss of a mafia family or group – of Lagos at the height of the crisis.