The federal government says it has identified and is collaborating with the private sector to the meet nation’s housing needs.
The Minister of Lands, Housing and Urban Development, Ms Amal Pepple, disclosed this in Abuja, when she toured the on-g… 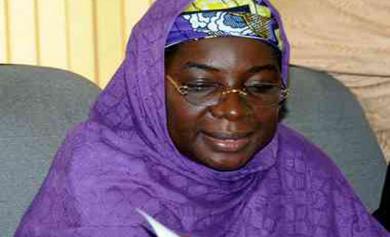 The Nasarawa State University, Keffi, which was closed down on Feb. 26, will reopen for normal academic activities on Monday, April 29.

Paralympics gold medalist and world record holder, Obiji Loveline has heaped praises on LEADERSHIP Newspapers Group for identifying with people living with disability and honouring them. Loveline alongside three of her colleagues, Nwokorie Ivory, Yakub…

Paralympics gold medalist and president Nigeria Paralympics Committee (NPC), Monday Emoghawve (MON) has advocated for the scraping of Paralympics Games and merged with the Olympics. He said this will fully help integrate physically challenged athletes …

The Senate President, David Mark, says the media in the country has contributed to the success of the National Assembly and those who have come to the senate from the media have performed well.
Mark made this statement when the Senate Press Corp paid h…

Tension In Rivers Over Sack Of PDP Exco

His Eminence Alhaji Muhammed S’aad Abubakar, His Eminence John Cardinal Onaiyekan and Governor of Akwa-Ibom State Godswill Akpabio were among those honored today at the 2013 annual LEADERSHIP Conference and Awards Ceremony.
The ceremony which beg…

Gov. Theodore Orji of Abia has called for the extension of the Federal Government’s amnesty programme to some five thousand repentant kidnappers in the state.

The governor made the call on Monday in Umuahia at a public hearing on the non-inclusion of the former kidnappers in the amnesty programme, organised by the House of Representatives Committee on Public Petitions.

Orji, who was represented at the event by Prof. Mkpa Agu Mkpa, Secretary to the State Government, said that the call became necessary following the omission of the kidnappers in the amnesty offer.

“These young people ought to benefit from the same amnesty package of monthly stipends and job/vocational training opportunities being enjoyed by their counterparts in the Niger Delta,” Orji said.

The governor said that the State Government had granted amnesty to the kidnappers within its limited resources.

He said that when large number of persons were unemployed there would be greater possibility of increase in criminal activities.

Orji said that the ex-kidnappers were eager to be involved in programmes that would enable them make a living.

Hon. Uzo Azubuike, Chairman, House of Representatives Committee on Public Petition, said that the event was initiated in a bid to find a solution to “an issue which had the capacity to engulf the society.

“Barely a month ago the committee was in Akwa Ibom to attend to a similar petition by ex-militants and the message is that there is still the danger of backslide,” he said.

He said that nothing would be left to chance, saying that collective effort should be made to create a community of love, peace and concord.

Mr Ahamefule Amaramiro, the Attorney to the Abia Committee on Amnesty, said the committee adopted procedures such as communication, advocacy and use of gatekeepers to reach and convince the ex-militants to embrace amnesty.

Amaramiro said that the activities of the committee were documented in hard and soft copies which were made available to the Public Petition Committee for reference purposes.

A participant at the hearing,  Mr Felix Ogbonna, appealed for the implementation of the outcome of the hearing.

Ogbonna said that the aim of the public hearing would be defeated if the proposals, suggestions and requests made before the committee were not implemented. (NAN)

UN Secretary-General Ban Ki-moon on Monday condemned the deadly attack at the Boston Marathon, describing it a senseless act on a day of celebration in the city.
Ban said the violence was “all the more appalling for taking place at an event renowned f…

The Presidency has denied claims and allegations that President Goodluck Jonathan has endorsed the beginning of campaign for 2015 elections.

This is contained in a statement issued on Tuesday in Abuja by the Special Adviser to the President on Media and Publicity, Dr Reuben Abati.

Specifically, Abati refuted a front page news report that a 21-member committee had been set up for Jonathan’s Second Term Bid.

“This is totally untrue and without any basis in reality. As he has truthfully declared on several occasions, President Jonathan has not yet taken a decision on whether or not he will seek re-election in 2015.

“He has, therefore, not mandated any individual, committee or organisation to start working on his behalf for the 2015 elections.’’

Abati said the president’s stated wish to be left alone to focus on delivering on his promise of good governance and national transformation without unnecessary distractions should be respected.

“Political jobbers and their collaborators in the media should stop heating up the polity with baseless speculations and falsehoods revolving around imaginary plans and schemes by the Presidency for the 2015 elections,” he said.

Abati said the Presidency had also observed an emerging trend whereby political opportunists were using the president’s name to promote themselves and their ambitions.

He said some unscrupulous persons were printing 2015 campaign posters with President Jonathan’s photograph when INEC had yet to announce the beginning of campaigns.

The special adviser cited an advertorial suggesting that the president had endorsed a particular candidate for Anambra gubernatorial election.

“For the benefit of the unwary, the Presidency emphatically states that President Jonathan has not endorsed any candidate for any position whatsoever ahead of the 2015 general elections.

“The President has neither commissioned persons to start campaigns for his own candidature,” he said.

Abati warned all 2015 political office seekers, and their sponsors, friends or collaborators, to desist from “unconscionable exploitation of the president’s name in the service antics of self-aggrandisement, promotion and positioning’’. (NAN)