The Federal Airport Authority of Nigeria (FAAN) has said it will boost its revenue generation through non- aeronautical bases when the remodelling works across the airports are completed.  This is coming as the airport authority disclosed that it ...

A new competition in the high-end smartphone segment will get tougher with the entry of Sony Mobile Communications’ new Android smartphone into the Nigeria mobile devices market. With the launch of its much-awaited smartphone, Xperia Z, in Lagos ...

With enormous potential in Nigeria’s maritime, the country’s shipping industry remained largely undeveloped, with local investors’ vessels in a comatose state. In this report, SAMSON ECHENIM x-rays the challenges and possible solution...

Vitesse striker Wilfried Bony has hinted that he would be interested in a move to Chelsea in the summer transfer window, but that he is focused on his current club for now. The prolific attacker has caught the attention of a number of clubs with his fi...

Enugu Rangers have said they are “studying” an offer of 12 million Naira (about $75,000) tabled by Warri Wolves for AFCON star Sunday Mba. Sunday Mba is in the middle of a transfer saga between Warri Wolves and Rangers international. The Ni...

Odilim Enwegbara, a leading economic thinker, is an MIT educated specialist in money and finance. In this interview with KEHINDE AJOBIEWE he bares his mind on issues surrounding the growing crises in the PDP and also speaks on the Nigerian economy. Exc...

Ahead this year's Easter celeberation, the United States Department of State has warned American citizens living in Nigeria over possible terrorist attacks in the country.

Issuing this warning through the U.S. Embassy in Nigeria, the Department of State said that given the history of attacks throughout Nigeria during previous holiday weekends, as well as the recent attack in Kano on March 18 and the failed attempt in Kano on March 23, all U.S. citizens living and traveling in Nigeria to take extra precautions for your personal security and safety.

"Due to the continued threat of kidnapping of expatriates country-wide, including recent kidnappings on Victoria Island in Lagos, the U.S. Mission recommends that U.S. citizens and organizations maintain accountability for the whereabouts of their staff, test communication systems to ensure that they are working properly, and ensure secure means of transport for any necessary travel.

"Review your personal security plans; remain aware of your surroundings, including local events; and monitor local news stations for updates.  Maintain a high level of vigilance and take appropriate steps to enhance your personal security and follow instructions of local authorities" the warning reads in part.

The U.S. Mission also advised all U.S. citizens to be particularly vigilant around churches and other places of worship, locations where large crowds may gather, government facilities, and areas frequented by expatriates and foreign travelers during the upcoming holiday weekend.

Noting that security measures in Nigeria remain heightened due to threats posed by extremist groups, the American government said that U.S. citizens should expect additional police and military checkpoints, additional security, and possible road blocks throughout the country during the holiday weekend.

Continue ReadingEaster: Us Warns Citizens Of Possible Attacks In Nigeria

In a statement in Yenagoa on Saturday Lt. Col. Onyema Nwachukwu, Media Coordinator of Operation Pulo Shield, said the vessel was arrested during its anti-oil theft and pipeline vandalism operations.

Nwachukwu said that the operation took place between March 19 and March 29.

He said that the arrested vessel, MV Buyus with fake clearance documents, was secured at the Nigerian Navy Dock Yard in Brass Local Government of Bayelsa.

The suspects, according to the statement have been handed over to the appropriate prosecuting agencies for further investigation and subsequent prosecution.

It added that a fishing trawler christened Bolajoko with five crew members on board was also impounded by troops of the JTF at the NPA Jetty, Bonny in Rivers.

It said that the fishing trawler was impounded, while trans-loading suspected stolen crude into large plastic tanks and drums with the aid of water pumping machines.

The statement said that the suspects were currently undergoing preliminary investigations at the JTF Sector 2 Headquarters in Port Harcourt.

``During the operation, five camps, where stolen crude oil was being refined illegally, were discovered and destroyed in Akassa, Sangana, Igbematoru and Ogbia creeks of Bayelsa.

``They were seized along Elume in Warri North, Escravos , Saghara Creeks in Warri South and Benneth Island in Delta,'' Nwachukwu said.

The drivers and tanker trucks were arrested when they failed to produce documents certifying them for lifting of the product.

They have been handed over to the Imo Command of Nigeria Security and Civil Defence Corps (NSCDC) for prosecution.

The JTF, however, urged oil firms operating in the Niger Delta region to collaborate and evacuate the reservoirs used by the oil thieves to deter the oil thieves from returning to the illicit trade.

``This call was necessitated, following the finding that most of the illegal oil refinery camps discovered during the operation had earlier been scuttled by JTF troops.

``But were later resuscitated as the reservoirs were not evacuated from the crime scene,” it said.

NAN recalls that Shell Petroleum Development Company had threatened to shut its Nembe Trunk line because of rising incidents of oil theft through its pipeline network in Bayelsa.

Mr Mutiu Sumonu, the Managing Director of SPDC, on March 4, urged the JTF to step up its activities to reduce oil theft, currently standing at about 60,000 barrels daily. (NAN)

Northern Traditional Rulers’ Council (NTRC) has appealed to federal government to reconsider its stand and grant amnesty to insurgents who embraced peace, reformation and reintegration.

The appeal is contained a communique issued at the end of the council’s meeting in Sokoto on Friday.

According to the monarchs ,  ``this is the norm the world over and there exists a precedent in Nigeria’’ .

``The unfortunate escalation of the insecurity in the country calls for decisive action by the government in order to contain it.

`` The meeting also called on the Federal Government to consider dialogue as the better option in resolving the crises."

The meeting also noted that the insurgency was not targeted at non-Muslims  as majority of the victims were Muslims.

`` Attempts on the lives of their Royal Highnesses , the Shehu of Borno , the Emir of Kano and the Emir of Fika and the killing of a number of Muslim  scholars  are testimonies to this fact .

``The meeting noted with deep concern that the majority  of the victims of the various crises are  the ordinary citizens."

Similarly ,the traditional rulers noted with concern the deteriorating rate of unemployment and its tendency to provide militants a potent source of recruits .

They called on all governments to take necessary, positive and tangible steps to create jobs  as well as fight poverty in all its ramifications .

``As part of the strategies to fight poverty in addressing the current and potential security and other challenges, the meeting calls for systematic review of the nation’s education system to make its products more skilful, productive , self-reliant and better prepared for life challenges .

``The meeting calls on Nigerians to engage in fervent prayers for God Almighty to intervene and relieve us of the current problems .

Gombe, March 30,2013 (NAN) The Police in Gombe State have confirmed the killing of two people when gunmen attacked Kumo Police Division in Akko Local Government Area on Friday night. The Commissioner of Police in the state, Mr Mohammed Sule, told ... 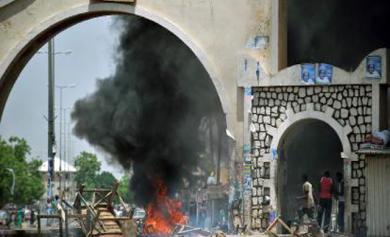 The quick intervention of a combined team of personnel from the Nigerian security forces helped to quell a clash between youths in some parts of Onitsha in Anambra on Friday.