All political news and viewpoints

The Congress for Progressive Change (CPC) has praised the opposition parties in the country over the formation of All Progressives Party (APC).
The CPC alongside the Action Congress of Nigeria (ACN), the All Nigeria Peoples Party (ANPP) as well a facti…

The Police Commissioner in Jigawa, Mr Kayode Theophilus, has warned officers and men of the command to desist from any act of indiscipline and criminality.

Theophilus gave the warning while addressing policemen in Kirikasama Divisional Police Office in Jigawa on Friday.

He said that the police were supposed to be outstanding, well-behaved and exhibit good characters at all times.

The police chief said that henceforth, local government council chairmen and traditional rulers in the state would evaluate the performance of officers and men posted to their respective areas.

“Our main duty is to protect lives and property at all times and we must do that with all sense of discipline and dedication.”

He said that any policeman found involved in any social vice would be punished accordingly.

Later at a stakeholders’ meeting, the commissioner also advised people to report any police officer and men involved in any act of criminality in the area. (NAN)

A community leader and two others on Friday appeared before an Owode Egba Chief Magistrates’ Court in Ogun for allegedly stealing a bunch of plantain valued at N2,000.

Oyenkaobi said the accused at about 9 p.m. at Imedu-Nla Village, Mowe in Owode Egba, jumped into the compound of Jubilee Baptist Church and stole the bunch of plantain.

“The community leader (Adebayo) and his accomplice jumped into the compound of the church, cut the bunch of plantain and were carting it away when they were caught.

“They were sighted by the pastor of the church, who was threatened and chased away with a cutlass by the third accused to prevent him from raising alarm,” he said.

The accused, who pleaded not guilty to the three-count charge of conspiracy, stealing and threat to life, were represented by their counsel, Mr Ade Agbolade.

Agbolade applied for bail for his clients, assuring the court that they would not jump bail.

In his ruling, Chief Magistrate Emanuel Adekunte granted the accused bail in the sum of N100,000 each with two sureties each in like sum.

He adjourned the case to March 21, for further hearing in the matter. (NAN)

The chairman of the Peoples Democratic Party (PDP) in Jigawa State, Alhaji Salisu Mahmud, has exonerated the state government and the party from having any hand in the recent Lamido /Amechi for president and vice president campaign vehicle sighted in K…

Two former governors of old Kaduna State and elder statesmen, Alhaji Lawal Kaita and Alhaji Balarabe Musa yesterday applauded the formation of  the  All Progressives Congress (APC), even as they warned that the Peoples Democratic Party (PDP) …

Senators from the newly formed All Progressives Congress (APC) yesterday stated that the new political party will salvage the political, social and economic situation in Nigeria with a view to rescuing the country from its present rot and corruption.
L… 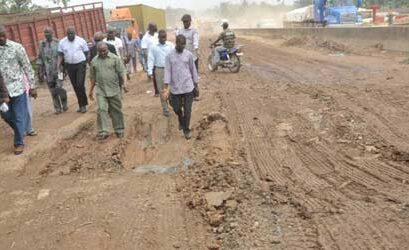 The Kaduna State Government has denied engaging incompetent contractors for the ongoing 31 road projects across the state.

The Commissioner for Works and Transport, Alhaji Suleiman Richifa, also denied the rumour that some of the contractors had abandoned work on the roads.

Richifa told the News Agency of Nigeria (NAN) on Thursday in Kaduna that the government was meticulous in the selection of the contractors.

He said the contracts, awarded in November 2012, were given to tested contractors who had undertaken similar road projects in the state.

Richifa said no contractor had abandoned site, saying:“as at today (Feb. 7) contractors were all working on various sites and they have achieved various percentage of the projects.”

The commissioner said the state had only paid 25 per cent advance payment to the contractors.

Richifa blamed the recent protest by youth affected by the Romi- Karatudun road project, on misinformation.

“The consultant ordered the contractor on the Romi-Karatudun road project to stop work, but all rifts had been resolved and work is going on at the site,” he assured.

Meanwhile, Richifa has said that the state government was yet to conclude plans to ban the operations of commercial motorcyclists, also known as ‘Okada riders’ in the state.

The commissioner said the government had not presented the bill to ban their operation to the state House of Assembly for legislation.

He said, however, that the government had purchased 700 tricycles, which would be distributed to the commercial motorcyclists, once the issue was concluded.

Richifa also assured residents that the 50 buses purchased by the state government would soon be inaugurated, to reduce transportation difficulties in the state. (NAN)

A Lagos White Cap Chief Was Killed By Suspected Assassins