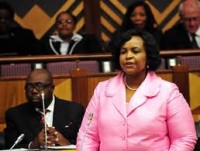 South Africa’s Minister for International Relations and Co-operation, Maite Nkoana- Mashabane says there will be no place to hide for people who engage in terrorism to hide in Africa.

Mashabane spoke against the backdrop of the bombings on Nigeria’s independence day for whichMEND leader, Henry Okah, who is based in South Africa is being held.

“I want to reiterate that there will be no place to hide for people who throw bombs in one country and run to the next because in doing that they will be undermining our efforts to keep Africa secure and stable,” she said.

The Minister, however, said application for political asylum would continue to follow the due processes of law in South Africa.

“When there are people who apply for political asylum in South Africa, the due processes of the law will take its due course and we will keep in touch and liaise with the countries who will be seeking the return of the said individuals,” she explained.

Mashabane said terrorist acts were condemnable, charging all African countries to fight against it.

The South African government on Monday arraigned Okah before a court in Johannesburg in connection with the explosions which rocked Abuja on Oct. 1.

He was slammed with a two count charge of engaging in terrorist activities and conspiring to deliver, placement and detonation of explosives which claimed lives and injured many in Abuja.

The Southern Africa correspondent of the News Agency of Nigeria (NAN), Wole Sogunle, reports that the session of the pan African Parliament is expected to hold a special session to commemorate the 50th independence anniversary of Nigeria and 16 other African countries on Tuesday.