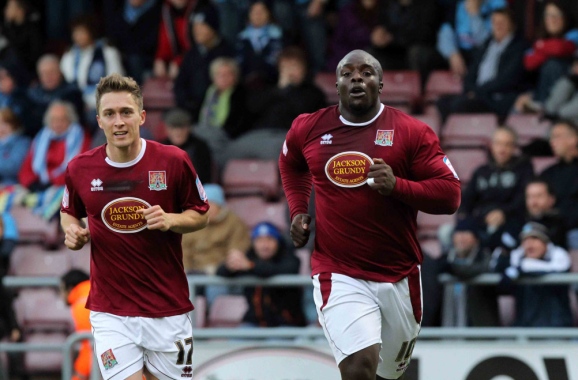 Adebayo Akinfenwa celebrates the first of his two goals against Wycombe on Saturday (Picture: Sharon Lucey)

Akinfenwa scored either side of the break and Chris Hackett put the seal on the result with a fine second-half goal to ensure the Cobblers took the points with a 3-1 win and climbed to 11th on the table.

The 30-year-old would had scored a second hat-trick in a week with a header, only to see the ball rebounded off the crossbar and has now scored 69 times in 134 starts plus 25 substitute appearances for the club over two spells.  He’s out of contract in the summer, and will be free to talk to other clubs from the beginning of 2013,

According to Jefferson Lake in Northampton Chronicles:

“Akinfenwa can now be called, with some certainty, the best Northampton Town striker of the Sixfields era.

He is the most consistent goalscorer to represent the club for 20 years and history will judge him to be one of their all-time greats.

But while this win, in a game Aidy Boothroyd called the biggest of the campaign so far, was built on what Akinfenwa did in the penalty area, it was a legitimate team victory, with just about every player registering an above average performance.”