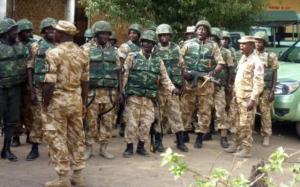 The residents of Agase, a suburb of Gboko in Benue State, have fled their homes for fear of reprisal attacks from Boko Haram insurgents.

Checks by the News Agency of Nigeria (NAN) in Gboko revealed that most of the residents had fled their homes, following the trailing of a kingpin of the Islamic group to a house in the area.

NAN reports that the Boko Haram leader, Ali Jalingo, was traced by security operatives from Abuja to his hideout in Agase but they were unable to arrest him. Some residents told NAN that they were awakened around midnight on Sunday by gunshots and sound of a bulldozer pulling down the building where Jalingo lived.

They recalled that they panicked and hid themselves under bed covers for fear of being hit by stray bullets, as sporadic shots from the security operatives reverberated in the area.

An octogenarian, Mrs Aese Adua, who lamented that her apartment was destroyed by stray bullets, nonetheless, thanked God for her safety. “I was woken up around midnight on Sunday by some unusual noise in the neighbourhood; I could not come out because of my age but my instincts told me something was amiss.

“I had to relocate my bed from its position to another corner of the room and I was surprised to see part of my room riddled with bullets,’’ she said. Adua conceded that she had never seen Jalingo “even for one day but I always heard movements in the house and I also know that the occupants are young people.