Nigeria became the first African team to qualify for the 2014 FIFA U-20 Women’s World Cup, after beating South Africa 1-0 on Saturday in Johannesburg. 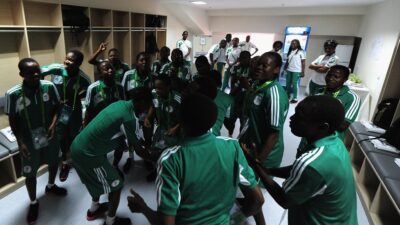 Striker Adeboyejo Yetunde scored the only goal of the match in the first half to power Falconets to a double and book their ticket for the global championship courtesy a 7-0 aggregate win.

With a 6-0 win from the first leg, the Falconets confirmed their superiority over the Basetsana by silencing them at their backyard to maintain their impressive record of being the only African team to have qualified for every edition of the global youth women’s championship since its inception in 2002.

The visitors sat back and contained the constant pressure from their hosts to cruise to victory in the second leg clash of the final round of the qualifying series.

The Nigerians made their debut at the 2002 edition, incidentally in Canada, and has yet to miss out on subsequent championships.

Their best outing was at the 2010 edition where they lost 2-0 to hosts Germany in the final.

The other African slot will be decided in Accra on Sunday, January 26 when Ghana’s Black Princesses lock horns with the Nzalang Feminino U-20 of Equatorial Guinea at the Accra Sports Stadium.

The Equatorial Guinea won the first leg by a lone goal but Ghana are bent on completing a double against the guests after beating them to the ticket for the FIFA U-17 Women’s World Cup last year.

The Princesses are also keen on achieving a hat-trick of appearances at the world event after 2010 (Germany) and 2012 (Japan).