Chelsea forward Victor Moses has apologised for coming very close to getting sent off in Wednesday’s 0-0 friendly match against Cape Verde. 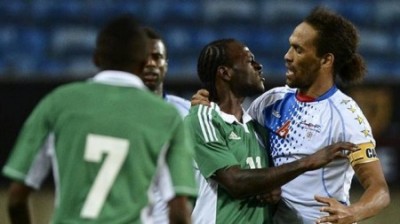 Moses escaped being sent off after he retaliated following a tackle on him by the Cape Verde captain. He was only booked.

“Moses has been sober after the game and he has apologised to the Cape Verde captain,” stated the team psychologist Robinson Okosun.

“I will be having a separate session with Moses today (Thursday) because there is need for him to understand that in African football he must learn to control his temper. You know players come up with several antics and we saw one of that against Cape Verde. He was only lucky to be on the pitch because he could have been sent off.”

The Eagles would observe this morning as rest and are billed to take on Dutch club FC Rotterdam  on Saturday in their last warm-up game before they jet out to South Africa on Wednesday.

Meanwhile, an advanced party of officials led by head of competition, Mohammed Sanusi, are due to depart for South Africa on Tuesday.

They are expected to ensure that all the Eagles need in South Africa are in place before they fly in on Thursday from their training base in Portugal.