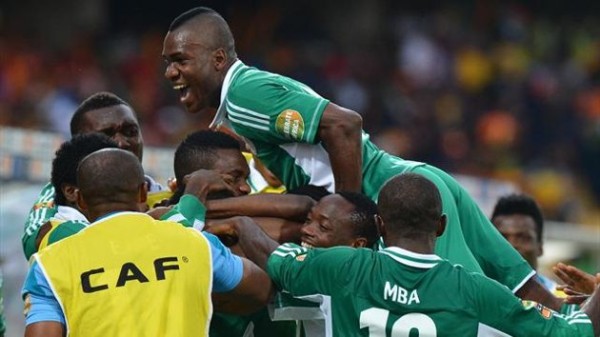 Nigeria masterminded the biggest upset perhaps at the 2013 Orange Africa Cup of Nations with a 2-1 win over Cote d’Ivoire in Rustenburg on Sunday to reach the semi final. Local-based midfielder Sunday Mba was the hero of the Super Eagles scoring the winner on 77 minutes after his shot deflected off Souleyman Bamba into the net. Early in the second half, Cheikh Tiote cancelled Emmanuel Emenike lead to set the game alive.

The Ivorians yet again failed to live up to their pre-tournament favourites tag as they were bundled out by a Nigerian side that produced their best outing at the tournament so far. The Eagles soared over the highly-rated Elephants and made clear their intent from the onset.

Cote d’Ivoire coach Sabri Lamouchi handed a starting role to Didier Drogba over youngster Lacina Traore, but the former Chelsea forward remained a pale shadow of himself throughout the quarter final clash, which may mark his final at the continental showpiece event.

On nine minutes, Victor Moses forced a superb save from Ivorian goalie Boubacar Barry with a long drive after weaving his way through. The Eagles controlled the game and on 16 minutes, a Moses cross flew across the goal as Brown Ideye’s head failed to meet it.

The Ivorians had their first chance at goal on 23 minutes and it was Tiote, with a thunderbolt that went wide. Three minutes later, the 1992 champions were let off the hook after a blunder from Koffi N’dri Romaric gifted Ideye a loose ball. Ideye squared to Emenike, who with Barry to beat surprisingly shot wide.

Nigeria deservingly went up three minutes from half time through Emenike with a bullet shot from a free-kick that Barry had no answers to.

The Elephants started the second half on a positive note and succeeded in restoring parity five minutes later through Tiote, who headed in a free-kick from Drogba at the edge of the penalty area. Cote d’Ivoire pressed for the equalizer with surging runs upfront led by Emmanuel Eboue.

The moment will then come for Nigeria on 77 minutes and Mba weaved his way through the Ivorian defence before firing a shot that deflected off Bamba into the net, leaving Barry hapless.

The Ivorians fought on but the Super Eagles held on to the slim margin victory to book a place at the last four where they are due to face Mali.

“I know the mentality of my players, their level of concentration, and I knew they could do it. My players were disciplined. Nobody gave us a chance, but we showed character.

“When I made the team, I knew we would have to fight. We started the game well and were tactically disciplined. It came with determination and mental toughness. I have a lot of respect for the Ovorian team, but we fought hard.”

“We did our best but could not succeed. It’s an obvious disappointment and you can imagine the state of the players.

“For me, it is a huge sadness. I have seen players work for a month, make efforts and I thought we were on the right path, doing good work, but it was not enough. On resignation, I do not even think about resigning after six months knowing the job done. It certainly was not enough to win the tournament.”