CAN 2013: We just have to continue believing – Oboabona

Nigeria Super Eagles defender Oboabona Godfrey is an unassuming man who goes about his business quietly but this demeanor belies a solid and quick player who has fitted in well in the Nigeria backline. 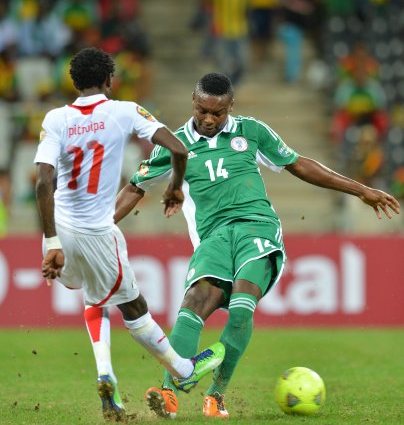 Oboabona is among a dozen local players in Stephen Keshi’s side and after he and his team-mates had kept out Burkina Faso for virtually the entire game a momentary loss of concentration saw Alain Traore grab an equalizer with pretty much the last kick of the game.

Oboabona believes the Super Eagles will learn from this hash football lesson and come good against Zambia in their second group match on Friday in Nelspruit.

“The match is in the past now and we know we could and should have done better but there are still two matches to play and no side in our group has won maximum points at this stage”.

Group C enters the second match phase with defending champions Zambia taking on Nigeria before Ethiopia  and Burkina Faso clash in the second of the doubleheaders.

Back in the Nigerian camp, Oboabona accepted that the first match had not ended quite as they had planned.

“We had done well with ten men up until they (Burkina Faso) equalised and there was little time to do anything about it.

“Against Zambia it will even be tougher because they are the current champions and there are no easy games here at the finals. “said the defender.

With all four teams drawing in their opening matches the stage is set-up for intriguing matches on Friday  the key question is  who wants to top the group most ? Many a pundit pointed to Nigeria and Zambia as favorites to come out of the group but both sides or at least one of them could find themselves needing a convincing win in the final group match to reach the quarter finals.

According to Oboabona the margins have narrowed but Nigeria still have the fate in their own hands, “From an initial three matches we are down to two to seek qualification to the next round. Of course it can be done and from here forth it’s a cup final approach “

“It has been a good 12 months in football for me and l am grateful to God for all that has happened so far” says Oboabona who reached the groups stage of 2012 Orange CAF Champions League with Sunshine Stars, a club he captains.

The defender is known to chip in with goals now and again. Selected by coach Keshi into the Super Eagles side he is playing in his first AFON finals and wants to make it a memorable one.

“It shouldn’t surprise anyone that we have locally based Nigerian players in the team, of course we have won AFCON with such players before and l don’t see any reason why we cannot repeat this. We will continue to work hard and believe in our ability. We are ready for Zambia and have been working on eliminating our blunders from the first game”. Said Oboabona