The National Sports Commission (NSC) on Tuesday in Abuja supervised elections into executive positions of 21 national sports federations against the 22 earlier planned. 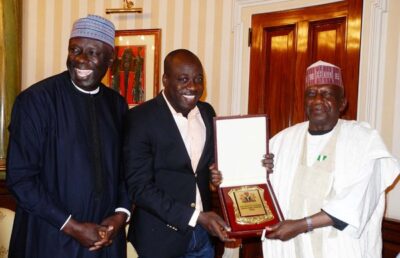 Bolaji Ojo-Oba, NSC’s Director of National Sports Federations and Elite Athletes Department, announced the results after a process which spanned over eight hours at the Abuja National Stadium.

The News Agency of Nigeria (NAN) reports that the elections were held in spite of protests from different quarters, following the alleged substitution of names of some candidates by the NSC.

Ojo-Oba later told newsmen after the announcement that elections for the Nigeria Boxing Federation (NBF) board’s executive positions had been postponed to a later date.

NAN recalls that the NSC had at the weekend postponed the NBF elections due to unavailability of the federation’s statutes.

Meanwhile, the elections lived up to expectations with some shocking results.

The post of the President of the Athletics Federation of Nigeria (AFN) drew more attention from observers than any other federation.

Solomon Ogba, the incumbent AFN president, had to twice endure a tie with his rival and former Vice-President of the association, Ibrahim Gusau.

The stalemate was, however, broken in the third round of balloting, as Ogba later polled seven votes while Gusau earned five.

Weightlifting, taekwondo, wrestling and cricket federations recorded upsets as the incumbent Presidents of the federations lost their seats.

Chibudom Nwuche, a former Deputy Speaker of the House of Representatives, secured six votes to defeat the former President of the Nigeria Weightlifting Federation (NWF), Chimdi Ejiogu, who had five votes.

George Ashiru emerged as the new President of the Nigeria Taekwondo Federation (NTF) with seven votes to unseat the incumbent, Jonathan Nnaji who had three votes.

Kwesi Sagoe lost his position as President of the Nigeria Cricket Federation (NCF) to Emeka Onyeama, while Soki Dakoru emerged as the Vice-President.

Also, Taiwo Nathaniel lost to Agu Ejidike by four to six votes to win in the Karate Federation presidential election.

Habu Gumel retained his seat as President of the Volleyball Federation, while Sani Ndanusa who is the Nigeria Olympic Committee (NOC) president kept his position at the Nigeria Tennis Federation (NTF).

Abdullahi Mohammed held grip of his seat at the Traditional Sports Federation, while Tijani Umar retained the President’s seat at the Nigeria Basketball Federation (NBBF).

Justice Danlami Senchi also retained his position as President at the Nigeria Badminton Federation, while Folusho Adefemi clinched the seat at Gymnastics Federation.

Adamu Erena won the President’s election in the Squash Federation, while Adeyemi Olalekan was victorious at the Chess Federation.

Darts will also be led by Chief A.G. Haruna, while Deaf Sports’ presidential seat was won by Usman Nahuche, and Sani Badamosi emerged at the Nigeria Fives Federation.

Speaking later, Nwuche told newsmen that his focus now as the newly-elected President of Weightlifting would be on the 2016 Olympic Games.

“Over the years, our sporting system has decayed and that is why wrestling was not able to do well at the last Olympics.

“I have just been elected as the president which comes with enormous responsibilities, and I know that it is a sport that is expected to do well at the Commonwealth Games.

“I also know that the sports minister expects us to win a medal at the next Olympics and to do that, we have to set the ball rolling immediately and what we will start with is drafting a constitution for the federation.

“The constitution is like a bible to a church. So, we must set up a constitution which will define each official’s responsibilities.

“What I foresee for the next four years is to get wrestling to be at the next NUGA Games, because I know what happens with an athlete that is educated up to the university level.

“We also have to ensure that we have regular tournaments, at least one senior and junior tournament, and we have to have a fixed national championship because we don’t have one now.

“We have to propose that, maybe, every last week of March every year will be for the National Wrestling Championship, so every athlete knows that that is where they will be selected for the national team,’’ Nwuche said.

Onyeama who won as President of the Cricket Federation vowed to institutionalise the sports in every state of the country.

“We will find a way to institutionalise the game, using the Director of Sports in the various states to get it into the school system just like it used to be before.