Wamakko vows to remain in PDP with his supporters 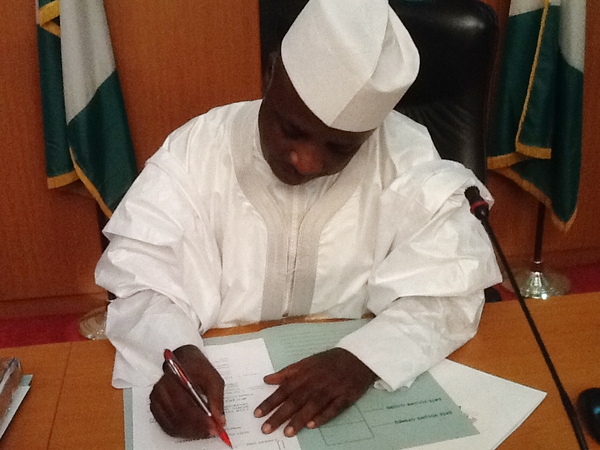 Governor Aliyu Wamakko of Sokoto State says that he and his teeming supporters will remain in the ruling Peoples’ Democratic Party (PDP).

Wamakko made the declaration when his teeming supporters thronged the Sultan Abubakar III International Airport and Government House, Sokoto to welcome him from his Netherlands’ trip on Wednesday.

The News Agency of Nigeria (NAN) reports that the event was organised sequel to the recent suspension of Wamakko by the National Working Committee of the PDP.

He accused, Alhaji Bamanga Tukur, PDP National Chairman, of being incompetent as well as running the party as a private enterprise.

He stressed the need for internal democracy in the party ahead of the 2015 general elections, adding “the people of the state are not fighting PDP but injustice and unfairness’’.

According to him, the time of imposition of candidates in the PDP is over if we want to be true and responsible democrats in tune with global trends.

The governor recalled that the party had no single elected representative at all levels in the state when he took over its affairs in 2007.

“But during the 2011 elections, PDP won all the elective positions from councillors to the governor and all the state and national assembly members.

“I have also being a loyal and proud member of the party and I have being helping in ensuring its growth and unity both here in the state and at the national level,’’ he added.

Wamakko said that the PDP members in the state could not be intimidated or harassed.

The Speaker of the House of Representatives, Alhaji Aminu Tambuwal, restated the loyalty of all the National Assembly members from the state in Wamakko and the PDP.

Tambuwal said that the PDP under the leadership of Wamakko in the state remained a united political family.

“So the purported suspension is of no effect to us and there is no retreat or surrender. Wamakko will continue to be our leader even after he finished his term as a governor,’’ he said. (NAN)